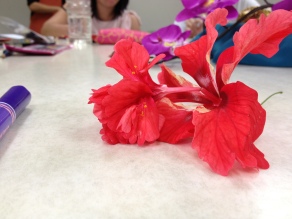 Recently I was cajoled by a dream about flowers, when the morning after I saw an advert by an art school on floral art and I signed up. After all I had not held a sketch book or a drawing pencil for eons and I was not close to being called an art enthusiast either; but I played along…to my dream…to my instincts…and to the post in the newspaper.

I was amazed at my performance at floral art. With zero experience and background, and no instructions on how to draw I think I did reasonably well. The pivotal ingredients to this self proclaimed wondrous result were two. One – the distraction technique. And two, the soothing tactics that were deployed in the workshop.

As I looked at the outcome lovingly, I remembered an equation on “performance”.

Noted by a pioneer in sport related performance Timothy Gallwey in the “The Inner Game of Tennis“. As the story goes he had declared that he could teach anyone to play tennis in 30 mins. A TV station took up his offer and supplied a middle aged woman who had never held a tennis racket. He told her not to worry, not to bother hitting the ball either. And simply to focus on calling out when he threw the ball, which way the ball was going. As he threw many balls, she called out and he gave her positive encouragement. And on one of the balls the lady spontaneously hit with her racket. And a good shot at that. Within 30 mins she was able to get a grip on forehand!

What Tim noted was that our “fear”, self-doubt”, “anxiety” get in the way of performance. Termed as “interference”, this diminishes our peak performance or our full potential. And Tim had used “distraction” to eliminate the negative internal chatter (main form of “interference”).

As for my floral art experience I realised that the facilitator used the tactics of distraction too and thereby reduced the “interference”. She discussed the biological representation, microscopic close-up of the flower and the parts that intrigued each one of us, and not once the specifics of drawing, etc. AND as the soothing notes of symphony music played in the room (an equivalent of positive environment), our hands moved deftly as we drew and colored, to create our personal masterpieces!